Why Storytelling Is Not Just For Kids

As part of our Storytelling @ MGPL program series, back in November I had the honor of coordinating and facilitating a storytelling event called Stories My Family Left Behind: From New York to Hollywood. It was presented by Carol Kaufman-Kerman, who is most well-known for being the sister of the late comedian and TV star Andy Kaufman.

You might be thinking, “A storytelling event for adults? That’s for children!” That’s certainly a common perception. But stories play a major role in everyone’s lives, not just for kids at bedtime.

Maybe you remember sitting around the dining table during the holidays with Grandpa as he shared the story of coming home from the war, or about how your family came to this country. Stories can seep into our memories and shape who we are at any point in our lives.

Hearing Carol share stories about her father Stan, a World War II veteran, and her brother, the late and great comedian Andy Kaufman, was a fascinating example of this. She took us through her father’s time as a runner in college, where he experienced anti-Semitism but also gained recognition as part of the track team at the University of Pennsylvania.

He later endured more turbulent life experiences, especially during his military service in France during World War II. Anti-Semitism and the longing for home were some of the themes Carol explored as she described those external and internal wounds.

Carol then lead us through the humble beginnings of her brother’s brilliant comedic career. She shared her fond memories of Andy Kaufman’s first foray into the entertainment business at the age of 9, giving a detailed account of what it was like to be his first audience member. By giving us an insider’s peak at his life, her stories about Andy truly made the audience feel what it was like to grow up as a Kaufman.

After the performance I spoke with Carol about my deep admiration for her brother, both for his work in television and in the world of professional wrestling. Hearing this, she surprised me with a gift: a rare WWE Classic Superstars Series #22 Andy Kaufman action figure—still in the box! 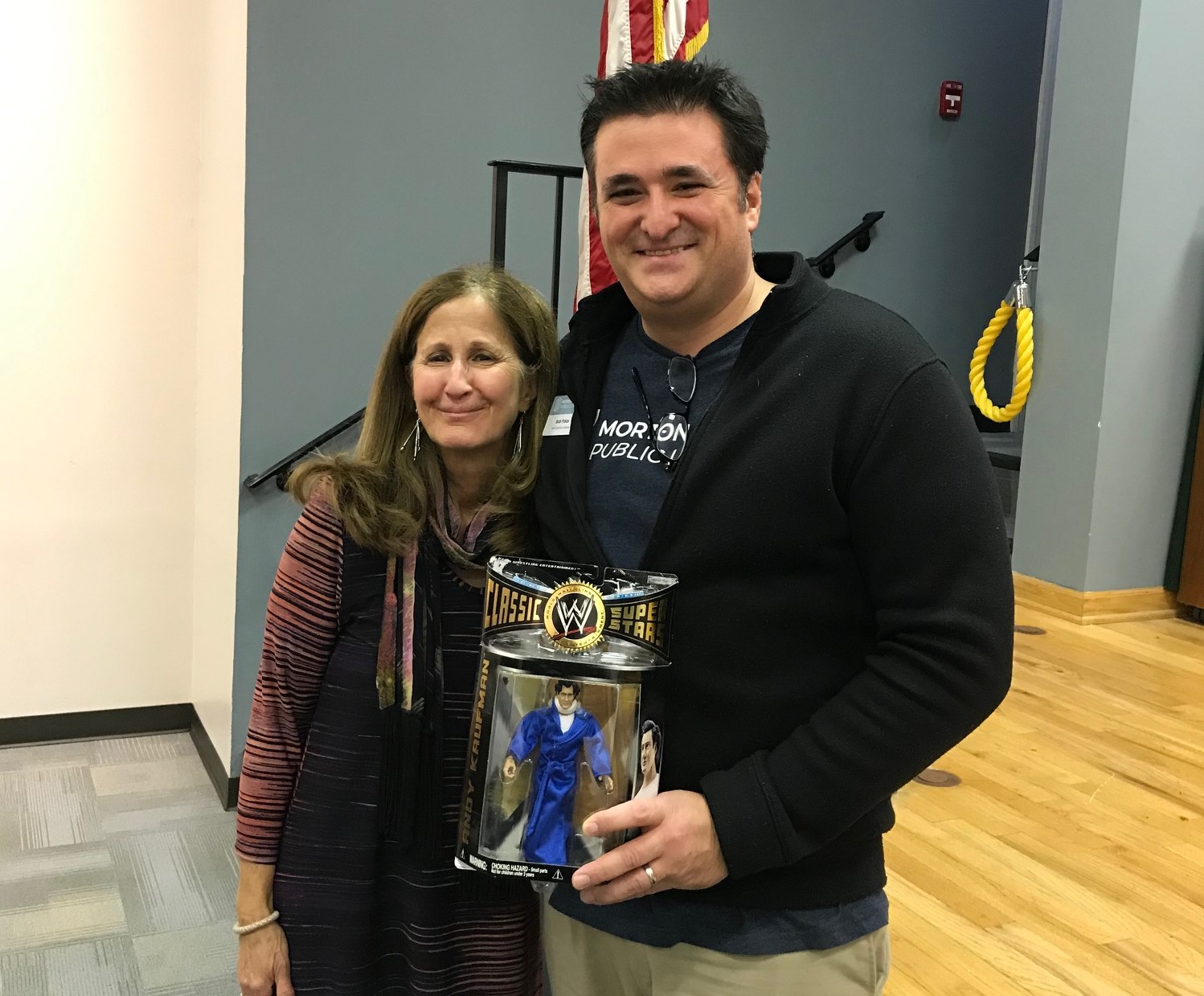 Overall, I found Carol Kaufman-Kerman’s storytelling to be thought-provoking, vivid, and something I’ll never forget.

Want to experience live adult storytelling for yourself? Come see Nestor Gomez on Sunday, March 8, as he tells stories from his childhood in Guatemala, his undocumented journey to the United States, and several experiences as an immigrant living in Chicago.

The Library is planning similar adult storytelling events in the near future. I hope you’ll consider attending so you can experience the transformative nature of live storytelling for yourself.